I’m now a qualified yoga teacher and reiki healer!! Ahhhhhh! The time has gone way too fast – I feel so grateful and also really accomplished – I did it!!

After graduation I headed to Ubud with some of the ‘new’ teachers, first stop was breakfast! Yes! Finally non vegetable based food after living vegan for nearly 3 weeks. Pancakes ? I was also to meet my partner after such a long time with very little communication. I was really nervous and anxious and had no idea what to expect. So I said bye to the girls and off him and I went shopping – elephant pants galore, a new yoga Matt and jewelry! We then spent 3 days eating healthy vegetarian food (meat for him), drinking smoothies and enjoying the amazing city. We also visited the monkey Forrest too which was actually pretty scary… Who would’ve thought that within 5 minutes of entering the place that a monkey would corner me and steal all my bananas much to Adam’s amusement. Then an hour into the Forrest after purchasing a new bunch of bananas 2 monkeys cornered me, took my bag and then took the bananas out of my bag. Ha ha it sounds hilarious but it was tres embarrassing and actually quite scary- they have teeth you know!

Next stop after ubud was Seminyak – this was very touristy and the prices definitely reflected that. The beach was amazing though and we got to watch the sunset over the Indian Ocean from beanbag chairs on the first night. Amazing! We also ventured to turtle island and uliwatu temple – but got ripped off with these trips which was a shame.

I love Bali, but here’s where my luck ran out and got interesting for any onlooker.

We arrived at the airport to travel to Singapore and even though I studied our flight itinerary over and over I had misread the baggage allowance so I was 8kg over the limit =£50 charge. The choice was to pay it or be like an annoying tourist who starts unpacking their bag and holds the queue up for ages at the check in desks…. I was the annoying tourist. Baggage sorted now immigration. I know you can only stay in indonnesia for 30 days without a visa so I arrived 30th July and was leaving 29th August – 30 days right? Wrong, 31! So after waiting for an hour in the queue I finally got to passport control and was then escorted to a back room where I got told off and fined 300,000 IR (only £18ish) however I had no money only my debit card. So I trotted off to the ATM and then my bank card got declined WTF – this is where I lost my zen and sat on the floor and cried like a baby. Thank god Adam was there to get me some money as if I had been alone I don’t know what would’ve happened!

31 days in Bali has been interesting – I had a massive culture shock, met some amazing people, learned a lot about myself, qualified as a yoga teacher and reiki healer (woo), embarrassed myself in front of monkeys and people and left the country looking a bit silly. I would say Bali won this time but I don’t mind as I’ve learned so much! 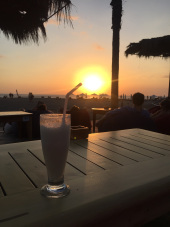